A beautiful blend of elegance and country warmth, these California wine country inns, cottages and hotels can be found in historic Russian River resort towns like Guerneville, Forestville and Healdsburg. As well as the immensely popular Sonoma Wine Country towns of Occidental, Sebastopol, Cloverdale and Sonoma.

Russian River Inns has gained public and media attention for the quality and diversity of Wine Country accommodations. Popular among travelers is the comfortably casual atmosphere at Inn at Occidental. The cozy Fern Grove Cottages’ proximity to the banks of the Russian River is complimented by the historic River Belle Inn, Camellia Inn, Bella Luna Inn and Raford Inn’s placement in the iconic town of Healdsburg. Case Ranch Inn is a Victorian farmhouse built around 1894, now lovingly restored, and is a registered Sonoma County historical landmark. Elegant bed and breakfast inns like the Applewood Inn, next to Korbel Winery and The Woods Resort in Guerneville is a special experience for Russian River/Sonoma Wine Country travelers.

All Russian River Innkeepers share a dedication to each guest in true Sonoma County fashion: genuine friendliness, warmth and hospitality.

Day trips to Armstrong Woods, the Sonoma Coast, Alexander Valley, Dry Creek Valley, as well as our own Russian River Valley vineyards can be combined with easy drives to the historic town of Sonoma and the Napa Valley making the Russian River Inns a great choice for Sonoma County lodging. 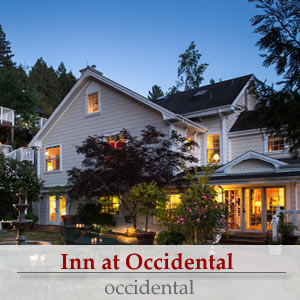 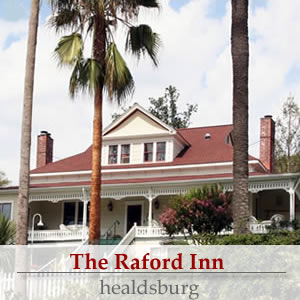 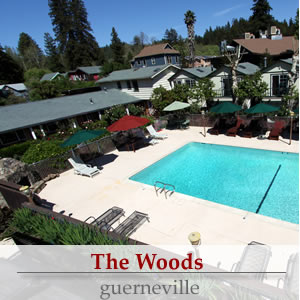 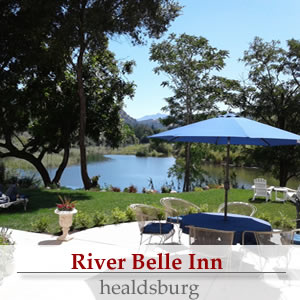 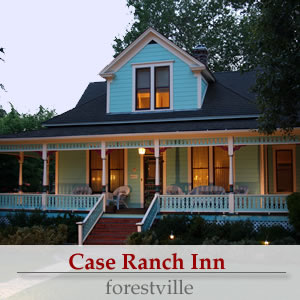 Sonoma County North, California, USA: One of California’s most geographically diverse counties, Sonoma is also one of its most vibrant wine areas. The Coast Ranges hug the Pacific Ocean on the western side of Sonoma County, protecting it from the cold ocean currents rushing along the coast from the north.

On the far eastern side, the Mayacamas Mountains carve the county line between Sonoma and Napa. In the middle, the Russian River Valley creates a series of rippling hills and flood plains. And it’s the notable change in temperature and conditions, between coastal and inland reaches, that enables such diversity in northern Sonoma’s wines.

There’s nothing quite like going to source: sipping that perfectly crisp Chardonnay amidst the rustic, rolling landscapes that brought it into being. 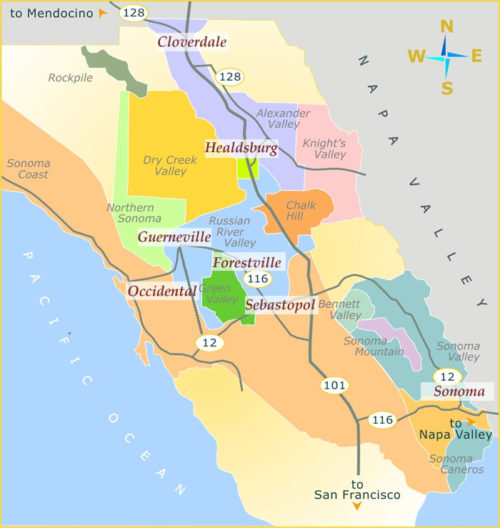 ABOUT THE RUSSIAN RIVER

The Russian River, a southward-flowing river, drains 1,485 square miles of Sonoma and Mendocino counties in Northern California. It is the second-largest river (after the Sacramento River) flowing through the nine-county Greater San Francisco Bay Area, with a mainstem 110 miles long.

The Russian River springs from the Laughlin Range about 5 miles east of Willits in Mendocino County. It flows generally southward to join the East Fork Russian River just below Lake Mendocino.

From there the Russian River flows south, past Ukiah and Hopland, and crosses into Sonoma County just north of Cloverdale. Closely paralleled by U.S. Route 101, it descends into the Alexander Valley. After it makes a series of sweeping bends, the river turns westward, where it is spanned by the Wohler Bridge, and it is joined by Mark West Creek north of Forestville, followed by Green Valley Creek to the south. The river passes Rio Nido and Guerneville. In that area, State Route 116 parallels the river, bordering it past Guernewood Park and Monte Rio.

Highway 1 crosses over the river before it flows into the Pacific Ocean between Jenner and Goat Rock Beach. The Russian River estuary is recognized for protection by the California Bays and Estuaries Policy. The mouth is about 60 miles north of the San Francisco Bay's Golden Gate bridge.

The lower Russian River is a popular spring, summer, and fall destination for navigation and recreation. It is very safe at that time for swimming and boating, with a gentle current. The river can be dangerous in the winter, with swift current and muddy water.